We have a ring — our own wrestling ring, and you know what? I still can’t believe it!

At the beginning of every show, it’s customary for me to come out and address our audience for that afternoon. They made the trip to come out and support us and I make it a point to thank them for that, while easing off any of the nervousness my roster may be experiencing at that moment. I’m used to this.

But walking to the ring – our very own ring, mind you- last weekend at the UP Film Institute for Open House: Level Up was just something else. I walked into a packed house of a little over a hundred and in the middle of all those people was our baby- our very own wrestling ring. Everything we had spent the last four years fighting for was right in front of me and I was shaking. 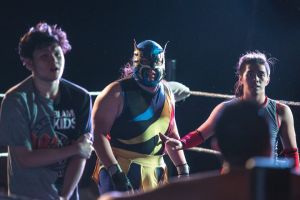 Dropkicks on My Heart

A good friend once told me, “Getting your heart broken by a girl is nothing compared to getting your heart broken by wrestling”. And it’s true. My heart was broken by wrestling and for a long time, it was hard to watch a single wrestling match without remembering what had happened to me. Wrestling wasn’t just taken from me, the new guard that came in made sure that as long as there was wrestling in the Philippines, Mike Shannon wasn’t going to be part of it.

I left them with the clear intention that whatever happened to me, I was either going to start another promotion or find my way into another. I was not done. I made my case before a jury who had already decided my fate, and lucky for me, people listened.

Robin Sane was the first to call, and then came Tala. They were interested and so were their friends, a renegade lot of multitalented performers who wanted more than what they were given. It was really adorable, now that I think about it. We would meet every so often and court each other. We didn’t say anything just yet, but it was obvious that we wanted to end up together.

And so as 2014 came to a close, we decided to go for it. Maybe we could make this wrestling dream happen. Maybe our dream still had a chance.

We entered 2015 with the makings of a promotion… Well, barely a fraction of a promotion. We had four wrestlers, one referee, and a booker. It wasn’t much, but it was better than my action figures and it was an actual start!

Our first official trainings happened at the Elorde Gym in Tandang Sora. It was a long way off for us, but hey, it had a ring with some suspension that could take a few bumps. It was all that we needed and within weeks, we were accompanied by old friends such as Rex Lawin, and newcomers to our little merry band such as Fabio Makisig and Gigz Stryker.

We knew we had the power to do it and so, just as we were in the process of preparing for what would have been our teaser video, we were dealt with two blows:

In a matter of weeks, we lost our name, our identity, and our home.

Somehow, we managed to get by for the next year. While there was a lot of turmoil and uncertainty, we just somehow managed to stick together and soldier on. Somehow we just knew if we marched long enough, we’d get somewhere.

After losing Tandang Sora, Fabio Makisig offered us Ninja Academy: They didn’t have a ring, but they had everything we needed to fine-tune our skills. Week in and week out, our guys would spend hours on their mats and foam pits to fine-tune the safe execution of their moves. We would have never been able to cultivate our high-flying and intense style if it wasn’t for Ninja Academy.

But even then, we continued looking for a gym with a workable ring to house us. We recognized that without an intangible demo of our product, we weren’t going to move. The decision was made, and with the blessing, love, and support of all our girlfriends, we shot our own teaser video.

We knew couldn’t be hybrid anymore, but we kept that spirit alive in our name: the Manila Wrestling Federation, MWF. And not long after, by the graces of the universe, our video attracted enough attention that we were fortunate to get the chance to perform in the first ever HistoryCON.

We had three days’ worth of wrestling to deliver, and to round out our small, yet sparky batch of wrestlers, we were accompanied by SPW (Singapore Pro Wrestling) Superstars “The Statement” Andreuw Tang, Eurasian Dragon, Alexis Lee, and the Thaibarrian. In addition, a travelling veteran by the name of “T.N.T” Greg Bownds also joined us.

HistoryCON was a learning experience. Anything we had planned for was instantly thrown away the moment we were out there, working our own shows for the very first time. And somehow, even with the lack of experience and finances, we made it and forged lifelong friendships with seasoned veterans who got us over by showing us first hand just how real wrestling can be.

The Eurasian Dragon put it best: “Wrestling is such an esoteric art-form. You have more bad days than good, but when the good finally comes, it makes up for everything.”

Taking Over the Square

After HistoryCON, you would have thought we’d have built up enough momentum for a full stand-alone show. But unfortunately, the cards of destiny had another plan. We had been evicted, again, from our new found home base, Alpha 51, in Mandaluyong City.

We decided to regroup and advance into the coming year with our eyes set on our stand alone show. Coach Gus Queens came in and helped us with a recruitment drive that would bring in a number of future stars including Hanzello Shilva, Morgan Vaughn, and Moises Liwanang.

Robin Sane and Mr. Lucha, along with Fabio, trained our boys to get them ring-ready as soon as possible. The boys were then rounded out with Frankie Thurteen, a young visionary whose age finally allowed him the chance to set foot inside the squared circle with no restrictions.

And so, with a small, but solid roster of wrestlers, we decided to go for it. The date was set, April 8th, 2017, MWF Live at the Makati Square Arena, headlined by Mr. Lucha and Robin Sane in a Manila Rules Match.

We had run Manila Rules several times during HistoryCON. But when we received a confused reaction from the audience, the decision was unanimously made to save it for something truly special. And if there was any match that was going to set the tone for everything that came after, it was Mr. Lucha and Robin Sane in that first main event.

Working through a combination of excitement and the jitters, both men went out there for five grueling rounds of non-stop action and made history. I still remember watching Robin Sane take that very first 450. He had been practicing that move for over a year, perfecting every chance he had. He didn’t say anything, but I knew he was just going to try. And when the moment came, that daring bastard took my breath away and pulled it off. The first in the country.

In the end, Lucha took home the victory by nailing Robin Sane with a perfectly timed and executed DVDX. It’s a move he rarely puts out there, knowing that it’s the ultimate killer once he drives you into the mat. But that’s what always made him special. Lucha has it in him to destroy whoever’s in his path without breaking a sweat, but he doesn’t. He holds too much respect for his opponents for a wrestler of his caliber.

With a thunderous roar from the one hundred strong in attendance, we did it. Despite some hiccups that would plague us, we made it to the dance.

Sure, there were a lot of challenges at Cinema Square. We had to work on a beaten boxing ring, we had to deal with an unreliable sound system and so many technical delays that took away from the experience of our shows. But in the face of all those hiccups, we stuck to our guns and kicked each challenge in the face. 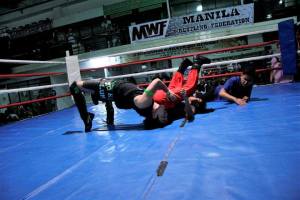 But as 2017 drew to a close, despite the reaction from newcomers that included Aldrin Richards and Ashura, and a monumental main-event with former WWE talent, Hoho Lun, it was clear that something had to change if we wanted to be the best in Asia.

I arrived to the UP Film Institute early that morning and the first thing I saw was that ring. I couldn’t even go inside. Aside from my wife, that ring is the most beautiful thing I had ever laid my eyes on, I couldn’t even step inside.

And that magnified the moment the show began. Just being inside our ring, in front of all those people, I couldn’t help but think of all of the moments, big and small, that led us there. The struggle, the sleepless nights, the sacrifice- it all finally led somewhere and I was right in the middle of it.

Yes, the Manila Wrestling Federation is under new management. And there are a lot of things I’m getting used to, but this was always the plan all along: to keep the ship together until a group with the resources and the patience came along to guide us through the next step of the journey.

With Kasaysayan on the horizon, I know that my sleepless nights and struggle are only just beginning. But that’s okay. Because now, we’re all pieces of a bigger entity that’s focused to make the Manila Wrestling Federation the third biggest promotion in the world. It’s a future that will enable every single one of us in the promotion to potentially make a living by doing what we love most.

I couldn’t think of a more exciting time to be a wrestling fan, because our history has only just begun. In fifty years, maybe more, there won’t be any Mike Shannons or Robin Sanes or Mr. Luchas, but there will always be the Manila Wrestling Federation.