It’s been a long day for me, but as I always tell Senior Analyst Tarek, who sometimes asks me if I’m beginning to get overworked, thinking about the MWF and the hard work we put in will always be among the highlights of my waking hours.

So let’s get to more work and answer your questions, shall we?

Christopher Sandico Pepper As your favorite fan, my questions are always answered.

Are their going to be individual wrestler shirts available for sale? So we could support our favorite wrestlers!

Maow Del Rosario When can we expect to see tshirts of the MWF wrestlers at the merch booth?

(I want my Aldrin and Frankie merch!!)

Yes, there will be shirts and other merch for your favorite wrestlers! It just takes a bit of time because – and we ask for your understanding – as a company, we want all our merch concepts and items to be consistent in quality and design, so we always take a lot of consideration in all of the stuff we put out. So we ask for your patience. It will come soon. Remember when you guys were asking me about the MWF Championship? It came sooner than you all expected, right? So keep an eye out for the merch, too. For now, please buy our MWF shirts and other miscellaneous items, to keep our engines running.

Martin Vicencio as your favorite fa…wait..that’s someone else.

With MWF drawing elements of Theater into their craft..is a musical episode/segment/show of MWF a remote possibility in the future? (a.k.a. MWF: The Wrestling Musical)?

You trying to compete with my favorite fan Pepper, who already went to WIP PH to buy his ticket for “MWF 2: Maki-Wrestling, ‘Wag Matakot”?

Well, last I heard, MWF’s Creative Director has written a few original Filipino musicals… So, it may really be possible. 🙂

Also, one of my dream productions to direct (it’s posted here for the public to see, so I’m claiming this idea as my intellectual property :p) is a pro wrestling-themed staging of Shakespeare’s Macbeth. The play’s themes of power-grabbing and corruption fits perfectly in a wrestling arena setting, so if someone gives me about 1 million pesos to produce this, I definitely will start in a heartbeat.

Also, there’s a recent off-Broadway play titled “The Elaborate Entrance of Chad Deity”, which is a comedy/drama about a professional wrestler. It’s in my theater direction bucket list. If ever I mount these productions, you’ll support me, right? Hope so.

Sebs Daniel Argarin Is there still a chance that we will see you sir in a manager role again at some point in the future?

No immediate plans for that, because our shows need me calling the shots for all technical cues, and I always loved being behind the scenes more than performing. But who knows, and why not? You might be seeing me cut simple promos soon, that I can say.

Naj Siplon Are there any plans to do a show outside of Quezon City? I’m from the south and I work weekends so it’s really hard for me to watch your events live.

what would it differ to the previous shows attempted by other promotions. like the batanes incident.

Naj, I hope to meet you in person soon in an MWF show. If the opportunity comes, we hope you can take that long trip to the north to see the MWF product we’re all so proud of.

To answer the questions, not only do we consider having shows outside Metro Manila, but that always was a part of the big plan. But in order to successfully achieve that, we have to build a solid fanbase and following first, like what we’re doing by holding our shows in Quezon City at least for the first few months.

And how would our shows be different from the ones attempted by other feds? I personally don’t know what really happened in Batanes, nor is it my business, so I can’t comment on that. However, when we do those shows, we’ll run as we have been doing so far: treat it like how we’ve done it professionally in events and theatre, and always put on the best show possible.

Ritz Sy I remembered the Reboot MWF show inside the UP campus, which is also my first time inside the university. Now that you’re going back to UP, I would like to know your opinion if the MWF brand is perfectly suited within the university turf.

Being a UP alumnus, I’d like to believe that I have a firm grasp on how UP students think and feel, and so far, most of our UP friends who saw the shows instantly got what we’re trying to do creatively. The best thing is, we’re already creating new wrestling fans in the University, with quite a few having MWF as their first exposure to the artform.

We hope to continue getting more new fans, whether they’re from UP or not, with the help of you, our core followers. If you like what you’re seeing, bring your friends and have fun with us! It’s easy to go to UP even if you’re not UP students, either by private vehicles or commuting. So tara, let’s go and join us!

Charlie Salmon You ever think of doing a Royal Rumble style contest? They’re always good crowd pleasers and it’s fun to have surprises from other feds show up.

Personally, I think the Royal Rumble is the best match concepts ever conceived. When the right time comes, and when we have a bigger roster to play around with, having a Pinoy-style Royal Rumble will certainly be at the top of our ideas list.

Mark De Joya Without giving away any overt spoilers, can you tell us about the design inspiration behind the MWF Championship? You have a very unique design language in your company.

Ohm David, MWF’s ringmaker and one of the best technical directors and set designers in the country (not even exaggerating here, he really is considered by everyone as one of the best in the whole damn country), will design the MWF championship belt. We can’t even describe how excited we are to show you the MWF Championship belt on December. 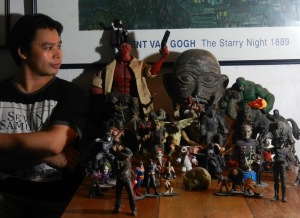 Carlo Agoncillo Do the MWF wrestlers use original music in their entrances? If yes who composes their music?

Not yet, though it is inevitable for us to use original music soon to avoid copyright issues. When that time comes, the music work will be split between yours truly and Teresa Barrozo, who scored most of the MWF videos that you have been seeing so far.

That’s it for tonight, my friends. See you in about two weeks at UP Bahay ng Alumni. Much love to all of you.