The MWF roster was revitalized by the announcement of a new management, led by Commissioner Mike Shannon, that promises to take them to a whole new level after a year of putting up shows at the now-defunct Makati Cinema Square. MWF’s new, wider audience at the University of the Philippines Diliman were introduced to the colorful characters of the Manila Wrestling Federation,  the stars of the Philippines’ very first Wrestling AksyoNovela.

Among the scene stealers was “Danger” Rex Lawin, with his career manager Gus Queens, who dominated UP Diliman student RG in a featured match. Meanwhile, the young, brash and confident Frankie Thurteen has immediately made a mark in the MWF by defeating Ashura, who had a bit of an altercation with her fellow grappling trainee, Kyle Sison. 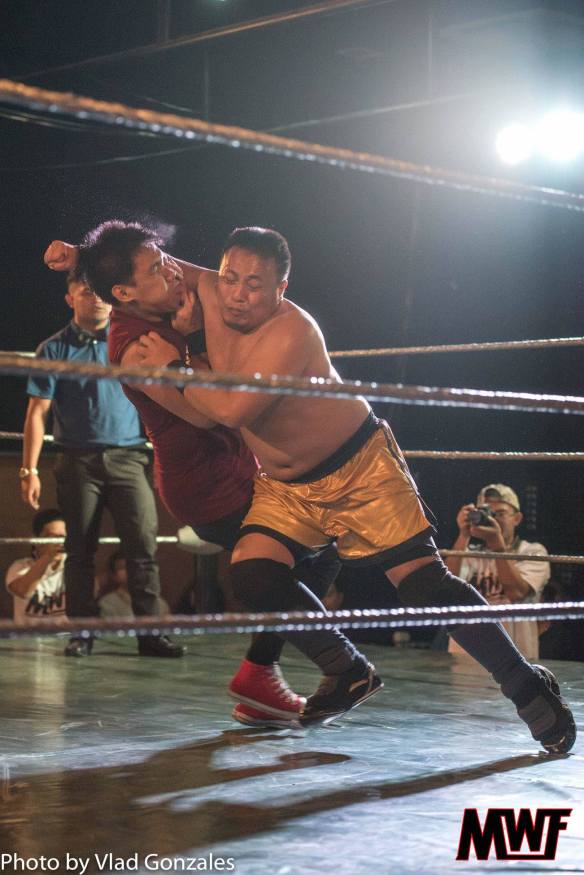 To end the show and to promote the company’s first official big event, “MWF 1: Kasaysayan”, the MWF management held a parade of characters to introduce the MWF roster. However, a loud-mouthed bully from Batasan named Fabio Makisig decided to turn the colorful parade into a big brawl by taunting everyone in the group.

Commissioner Mike Shannon then turned the brawl into an impromptu over-the-top-rope battle royal, and promised the winner to receive the company’s first accolade, the History Maker Award.

The battle royal had two of MWF’s pioneers, Robin Sane and Mr. Lucha, as the last two men standing after Lucha had eliminated top prospect Frankie Thurteen. The need to win the important match fueled Robin Sane to push Mr. Lucha out of the ring, while the “Pride of Sagada”’s back was turned.

The stage is set for MWF’s Year One.