Highly regarded for his devastating
and awe-inspiring finisher, the ‘450
Splash’.
Robin Sane is no ordinary wrestler: he is the best high-flyer in the history of Filipino wrestling. He gets off on the thrill and his ability to captivate the crowd each and every time he steps into a wrestling ring.

“The Pride of Sagada”, Mister Lucha is one of the established stars of the Manila Wrestling Federation.
His gear is inspired by the Filipino flag and represents his deep respect for his country. His dream is to become a world-traveled veteran who looks at in-ring success as a means of uniting his divided
country.

Ninja Ryujin suffered great loss and
tragedy at a young age when he was taken away from his family. Every year, a horde would raid his village to seek a fresh batch of young slaves, kidnapping every child in
sight. After having escaped his captors, Ninja Ryujin found a new home in Manila. A survivor of the streets, Ninja Ryujin has made a vow to stand up for children everywhere as MWF’s resident ninja.

From the streets of Manila to the
silverscreen, Gigz Stryker is a living
embodiment of classic Filipino machismo. He commands attention with every step he takes, knowing full well that any situation can become a fight. The 90s Action Hero has turned his attention to the Manila Wrestling Federation as his personal path to fame and glory.

Brash, young, and more talented than you
will ever be, Fabio Makisig has established
himself as the most hated man in all of
Filipino wrestling!
Fabio doesn’t step into the ring for glory or
fighting spirit- he wrestles for one person
and one person only: himself. If it’s going
to take him closer to a bigger pay day, you
he’s going to do it… He’s going to do it well. 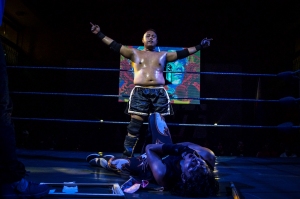 ‘Danger’ Rex Lawin is not a wrestler. He is a walking war machine who feasts in his opponent’s defeat. The squared circle is his playground. Survival is futile.

Life-coach, miracle-worker, entrepreneur,
influencer… These are just some of the words
people have used to describe Coach Gus Queens, the man who makes things happen. No matter how impossible the dream, through the power of his words and his relentless will, Coach Gus Queens can do it. This dream maker now has his eyes on the Manila Wrestling Federation as his ticket to global dominance!

The self-proclaimed “King of Manila” is without a doubt one of the most prolific wrestlers in the
scene today. His love for donuts and
Tumblr hides a spirit forged by broken dreams and abandoned memories.
There is more to Frankie Thurteen than
meets the eye. He knows it. His friends
know. But the question lies in the fans- will
they ever know?

The Bae City Bruiser has
received an outpour of adoration from the
fans in the internet, which has left the young gun with a chip on his shoulder, wanting to break away from tradition and the intentions of his elders in order to pursuit a career built from pure fighting spirit. But, as he will soon learn, you’re going to need heart and discipline
to make it in this sport.

The howling young cub is looking at the
MWF battleground as his claim to
greatness.
Hanzello’s background is intriguing and
mysterious; his every move guided by the
spirit of the wolf that lives within him. He
is a brave warrior with a lot of heart, but he
is naïve and has much to learn.