The UP Bahay ng Alumni was scorching hot in anticipation for the one-on-one match between bitter rivals Robin Sane and one of the founding fathers of Southeast Asian wrestling, former WWE Cruiserweight Classic and NXT competitor Ho Ho Lun from Hong Kong.

After Mr. Lucha’s defeat at the hands of his best friend and MWF co-pioneer Robin Sane, the rest of the Round 1 matches for the inaugural MWF Championship happened at MWF 3: Republika, bringing a few surprises, twists and turns to the ManilaVerse.

Fabio Makisig barely survived facing his own fears when he faced the ghostly Jorelle Liwanag, only beating (and outsmarting) MWF’s resident white lady via countout. The calm and focused Ninja Ryujin defeated Hanzello Shilva, who started showing bizarre signs of his animalistic tendencies in the match. Aldrin Richards defeated the newly re-christened Khayl (not Kyle) Sison, who came out in his full hypebeast persona for the first time with the help of PWR’s “The Kakaibros”. “Danger” Rex Lawin also continued his mean monstrous streak, not only eliminating The Man-Doll Martivo to advance in the tournament, but also attacking Martivo’s partner Robynn post-match. Also, in a bizarre and unfortunate twist of fate, “The Glitch” Morgan Vaughn has summoned his mask’s technological disruption powers to distract UP Diliman’s own RG, causing him to easily win the match in just a few seconds.

Although MWF’s Action Hero Gigz Stryker lost his Round 1 match against the interim bearer of the “Aklat ng Liwanag” Bro. Jomar, his movie star universe is shaping up more clearly, as he struggles to search and rescue the missing menudo girl Geenuh while stirring up a star-crossed romance with Neneng.

But the biggest story of the night was the painful unraveling of Mr. Lucha. The MWF KapaFEDs all witnessed his embarrassment, with his student Ashura slapping him hard after being defeated by Frankie Thurteen, who incidentally just returned from injury suffered at the hands of “Danger” Rex Lawin. Mr. Lucha’s other student, Khayl Sison, doubled down on the Pride of Sagada’s humiliation, as Sison verbally ripped his former mentor to shreds, saying that his association with Lucha held both him and Ashura down for the longest time. 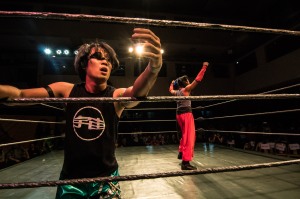 Ho Ho Lun lost to Robin Sane, in one of Southeast Asian wrestling’s most talked about upset wins.

Lucha’s rage finally exploded before the night has ended. After Robin Sane defeated Ho Ho Lun – against all odds, with Lun bringing his own partial referee from China – via small package, the Hong Kong star wreaked havoc by attacking MWF officials including Commissioner Mike Shannon and threatening to publicly desecrate the Philippine flag. The made the whole MWF locker room, led by Mr. Lucha, come out and drive Lun away. However, the celebration did not even last a few seconds, when Khayl lowblowed Lucha and sparked the roster-wide violent brawl that left bodies scattered all over the UP Bahay ng Alumni.

Amid the destruction, the three co-founders of the Manila Wrestling Federation – Ninja Ryujin, Robin Sane and Mr. Lucha – were the ones left standing, before the now-infamous Sagada Driver that betrayed years of friendship between Lucha and Sane was delivered.

The ManilaVerse was shaken to its core, but was only the beginning of a darker period for MWF.

MWF 9 - Date and Venue to be announced SOON